Funding cryptocurrency development: How Tezos has grown its financials

Cryptocurrency is building the decentralised future, or so we are told, but the construction and architecture of this creation takes resources, manpower and most importantly, money.

The ideological progress of cryptocurrencies’ early years, where coins were built and supported for free by staunch believers in libertarian ideals have faded in recent times.

Whilst its true there are coins that function without true centralised planning, few new coins are following this path. Instead, the majority of cryptocurrencies traded today came around through initial coin offerings, and thus consist of teams with pools of money to spend on their projects.

This changes the fundamental relationship a cryptocurrency investor has with their investment. During an ICO, you not only invest in the coin but in its creators. You pay their wages.

Many of these coins promptly set up shop and then collapse due to poor financial management, overly ambitious projects, or through exit scamming.

However, for the companies that are still functioning, it is fascinating to see the different approaches companies have taken to lengthen their runways and keep development of both coin and ecosystem moving forward. Over the coming months we will explore a number of these strategies, starting with Tezos.

You can purchase Tezos with Skrill by signing up here.

Now, these are quite frankly absurd values for what was then a start-up without a finished product. But today, the Tezos market cap stands at close to 1.5 billion dollars and the Tezos foundation sits on a war chest of funds that exceeds $600,000,000!

Digging further into this is relatively easy, as the Tezos foundation is known for its transparency when it comes to reporting. Having committed to releasing bi-annual updates, including in-depth reporting on its financials, we can explore how the Tezos team has managed to remain so well-funded almost three years after their ICO concluded. 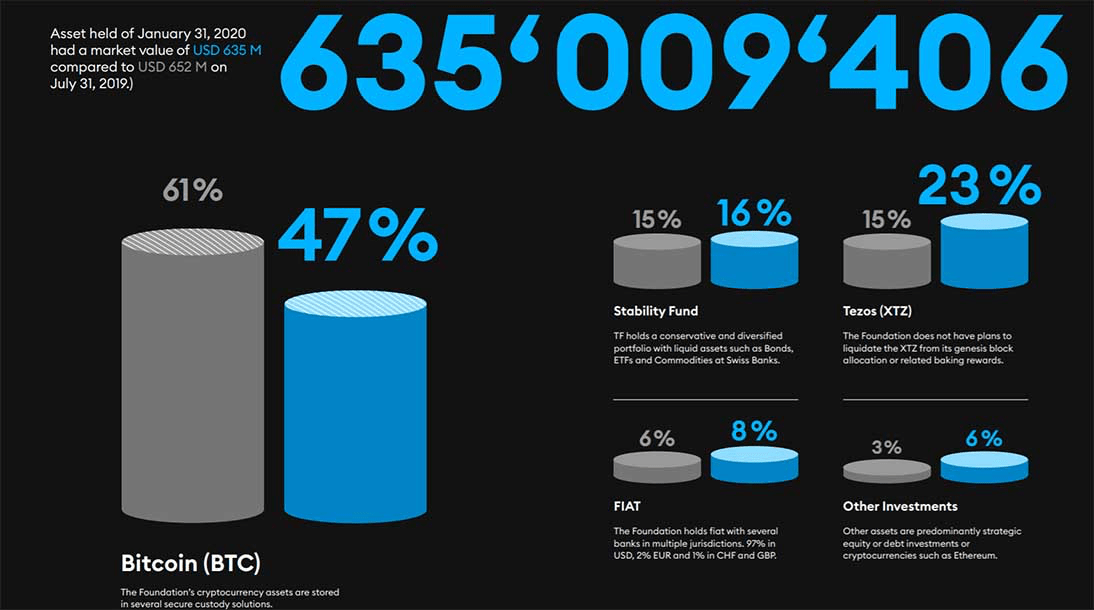 Above is an image from their latest bi-annual report released in March this year, looking at how their holdings changed from July 31st 2019 (grey) to January 31st 2020 (blue). Conveniently split into five categories this is how we will structure our analysis.

The five areas of funding

By a clear margin, the single largest contributor to the Tezos Foundation’s overall holdings is Bitcoin.

Although down from 61% six months previously, it still sits at close to 50%. During the six-month period the foundation sold up to 8000 bitcoins, reducing their exposure to the volatile asset.

Talking to Coindesk, the CFO of the Tezos Foundation, Roman Schnider, said they still considered bitcoin as a "key store of value" however their financial strategy was to make sure they could fund long-term objectives "without being distracted by short-term market moves."

Even with such reductions, it is still comforting to any bitcoin investor to see that one of the largest companies in the space has such faith in the largest cryptocurrency.

As is common with the majority of ICOs, the Tezos Foundation awarded a portion of the generated Tezos to themselves.

Tezos however is a proof of stake coin, meaning the foundation will have been receiving more Tezos each day purely by holding their coins, or ‘baking’ them (the term used for staking in with Tezos).

Staking is a feature present in some cryptocurrencies whereby locking up your coins in a contract, either yourself or through a third party, you earn more of the same cryptocurrency. In the case of Tezos, this amounts to around +7% a year, although this percentage increase used to be higher.

The foundation made it clear in this latest report that they are not looking to sell any of these coins, so for now we can consider them a moot asset so far as funding development goes.

The clue is in the name here. The Tezos foundation has diversified 16% of their holdings into low-risk low-yield assets such as bonds and commodities, all held in swiss banks we are told, to further strengthen bash in the stability narrative.

This is a sensible thing for the foundation to do, although less exciting from a cryptocurrency standpoint.

There are zero assumptions needed here, which is always nice, as they breakdown their fiat holdings for us:

Cash isn’t quite king for them, but it is a sizeable portion of their holdings.

The only name drop we get here is Ethereum. Knowing that they raised 361,122 ethers in 2017, which would have been valued at $65,724,204 on the 31st of January, we can deduce they have been heavily reducing their Ethereum exposure.

Perhaps unsurprising for an ‘Ethereum Killer’ – a term given to a number of cryptocurrencies fighting for Ethereum’s throne as the go-to ecosystem for decentralised applications.

The only other information we get here is ‘strategic equity or debt investment’. Potentially what they class as the risky side of their portfolio, but without more information it would be foolish to take any in-depth guesses here.

Having run through the information that Tezos makes public it is genuinely impressive how transparent the Tezos Foundation are with the reporting on their financials.

Looking at the available data, it’s clear that whatever you think about the long-term prospects of Tezos the coin, Tezos the foundation is in a good position to fund development for the foreseeable future.

You can buy Tezos here with Skrill.

All opinions are my own. This is not investment advice.

Crypto and blockchain expert Jordan Stoev answers five frequently asked questions about NFTs. Find out what NFTs are, how they work, and whether the controversy surrounding them is grounded in truth.
What is an NFT?
On Thursday night, Bitcoin was affected by a global financial crash that affected the digital currency market. Our in-house crypto expert investigates.
Bitcoin news this week: A black Thursday turns into a green Friday
Buying and selling cryptocurrency can be a risky business. You can safeguard your investment by avoiding these common mistakes that plague new buyers.
Important Mistakes to Avoid When Buying Crypto